Don't have an account?
Enter your email and desired password below to create one.
Note: Some people using Safari have had trouble creating an account.
If it doesn't work for you, please try Chrome or Firefox.
Have an account?
Login below with it.
Forgot your password?
Contact me on Discord and I will reset it for you.
[Automated password reset coming soon]
Welcome to Teletraan I
Teletraan I was made to be as helpful as possible with the Transformers TCG. It has a deck builder with a built-in Battle Simulator, you can use it to track & share your card collection, and it contains a wealth of information for the game. Teletraan I also incorporates the major community-made sets, making it easy to find the ones you're looking for. Teletraan I is constantly improving and always trying to be better.
Looking for ATP content? Click here!
About the Game
Welcome (Back) to the Game: A quick explanation of where the game stands now, with WotC gone and the community's further development.
FAQ About the Game: Questions & answers regarding non-gameplay elements of the TCG, such as what card sleeves will work.
About Teletraan I: How to report errors, a history of the site, and some thank yous.
Aequitas: An easy to search database with official rules & rulings.
Playing the Game
Downloads & Printing: Ready-to-print PDFs and images for all available sets, as well as OCTGN and Tabletop Simulator links.
How to Play: Instructions and beginner tutorials on how to play the game.
Playing Online: Instructions on how to setup and use Tabletop Simulator, OCTGN, and webcams for playing online.
Alternate Formats: Some of the more commonly used alternate ways to play the game.
Upcoming & Ongoing Tournaments
Analysis of past tournaments available on the tournaments page
What's New
Updates to Teletraan I & recent content from community creators
If you'd like to submit something to be on the front page, click here
New video from Servants of the Dice Gods Sep 23rd
Transformers TCG: The Meta Developments of Season 2 Encounter 1

A note to TTS users: Aug 30th
Due to some conflicts, I've to change some directories around. Will will break images in Tabletop Simulator, especially if you exported from Teletraan I. The fix is simple though, just go re-export your deck!

Veral has already been made aware of this, and will likely have the card images fixed on the mod-side of things as well.

While most changes were very small, there were "a lot" of them. Some card IDs have changed too. As such, it's going to take a couple days to get the database fully updated. There will be a post on the front page when these updates are done, so until then please don't report Wave 8 errors (do please report any others though!).

Feel free to build decks using these Wave 8 cards, and if there's any discrepancies, go with what the image says rather than the what Teletraan says.
Card of the Day
October 4, 2022 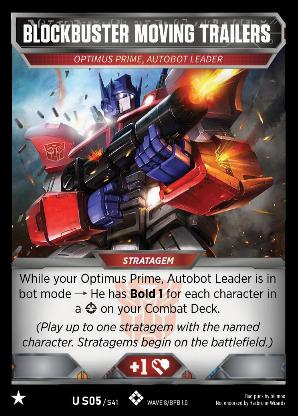 Previous Cards of the Day
© Z-R0E